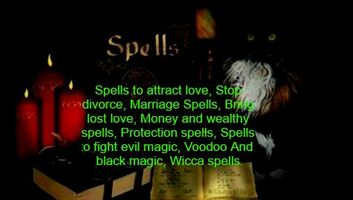 The Basic Rule
Before you start learning the witchcraft, you must remember the single most important tenet of witchcraft regarding rituals and magic: Whatever you do will come back to you three fold. If you commit a sin, you will face three-fold punishment. If you do good, you will be rewarded three times.

Rituals
The rituals used in witchcraft are not just hocus pocus way of mystifying the worship or mumbling meaningless words or sentences.  The rituals are meant to evoke the hidden energies in nature and channel them to achieve positive and beneficial results.

Rituals involve casting circles, calling quarters, invoking gods/goddess/ Mother Nature/Mother Goddess to bless you with the required energies and finally closing the circle. You can follow the established rituals for worship or you can develop your own. It is always better to write them down so that you can stick to them.

Disclaimer
Spell Casting is an Ancient Practice and Tradition, it is not Scientifically proven.* It is not against anyone's religion!** This website will be constantly available and the information on this website is non-misleading.result may vary